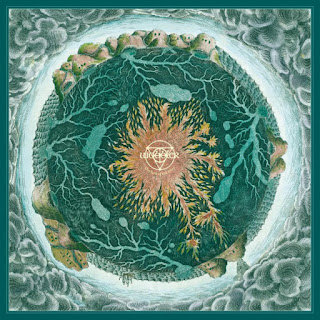 Wobbler originated in Honefoss, Norway in 1999, and with the release of this new album, Dwellers of the Deep, the band have now released 5 albums, since the debut, Hinterland, saw the light of day in 2005. I was fortunate enough to see this band in December 2019 when they headlined a mini-festival in Glasgow. The Prog Before Xmas (PB4X) is an annual one-day event featuring 4/5 bands with the proceeds going to named charities. This has been taking place for 5 years, but Covid-19 has caused this year’s festival to be cancelled. Last year, Wobbler played a set including many great tracks from their back catalogue, interspersed with music from the Dwellers of the Deep album and they simply “blew” the crowd away.

Dwellers of the Deep is a 4 track album with a total time of just under 46 minutes and the final track, “Merry Macabre” is the longest on offer with a playing time of 19:00 minutes, and the penultimate track, “Naiad Dreams” is the shortest at 4:24 minutes.

The band on the album are Andreas Wettergreen Stromman Prestmo (vocals/guitar), Marius Halleland (guitar/backing vocals), Lars Frederik Froislie (keyboards), Kristian Karl Hultgren (bass) and Martin Nordrum Kneppen (drums), with Lars, Kristian and Martin original members of Wobbler. Kristian also guested on the Airbag current release, A Day At The Beach. Andreas was present in the band by album No 3, Rites At Dawn, in 2011 and Marius was onboard by album No 4 in 2017, From Silence To Somewhere.

The opening track, “By The Banks" (13:49), bursts into life with the band in full flow, soon to be joined by a bit of vocalization, then a simple keyboard and bass passage underpinned by excellent drumming. The bass and keyboards carry the track on before Andreas pitches in with his clear powerful vocals. The keyboards continue to "run" the track with those superb bass notes just in behind. The track builds and then gently subsides and the listener is both drawn in and carried along. At around the 5-minute mark, the piano has an excellent passage, very tranquil compared to what has gone before. Behind the vocals, the bass slowly builds and the guitar, drums and keyboards join the proceedings again. At the 9+ minute mark, there is a return to the tranquil style passage, and indeed, it is this contrasting switch that makes “By The Banks” an engrossing start to the album. Each member makes an amazing contribution to the sound, the clear vocals, the sweeping, soaring keyboards, the thundering, but so controlled bass, the subdued, but occasionally crunching guitar work and that superb drumming, both intense then very subtle at times.

The two shorter tracks are very different, with "Five Rooms" (8:28) being a close relative, musically speaking, to the opening track and "Naiad Dreams" (4:24), being a simply beautiful ballad with an excellent acoustic guitar start, showing the simpler, gentler side of the band. Both are excellent in their own way and set the listener up for the finale of the album.

The 19:00 minute "Merry Macabre" is a real tour-de-force, starting with a gentle introduction before the keyboards appear around the 1:00 minute point. As the vocals, bass, guitar and drums all add their presence, the band are off on a journey that encompasses all the areas that Wobbler have demonstrated throughout their back catalogue. Symphonic slices, eclectic sections and even a little jump in and out of the jazz world, appear and morph into one another, providing the listener with a stunning aural experience.

Each release has taken the band further and these 5 musicians know exactly what they want to do, and on Dwellers of the Deep, they have shown the world just what they are capable of. This is a superb album and should find a space on the cd/vinyl shelves in all progressive music followers’ collections.