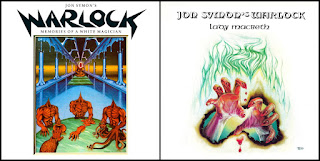 John Symon was known as a one-man band called Rasputin and he toured throughout Germany and Austria and also appeared on several TV shows.  He released a couple of singles before, in the 80s, becoming better known for his Warlock musical works.

These (re-mastered) editions are the first time the albums have been available on CD and digitally.

The “Memories of a White Magician” studio album was recorded twice, once in 1981 and then again in 1983 and this edition includes both versions of the album. The highlight of the 1983 album’s release was the performance in front of 7000 people in Berlin’s International Congress Centre.

“Lady Macbeth” was originally released a year after the first album and this edition features the 1984 non-album single of the title track which now appears in its rightful place in the score.