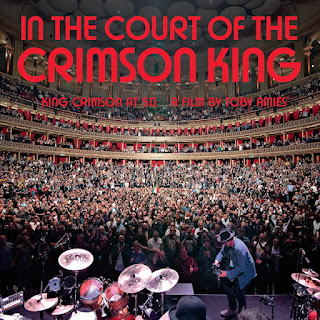 Described by Variety magazine as “really about as good as rock documentaries get,” the long-awaited, official King Crimson documentary by Toby Amies will be released in physical form on Nov 18th as a 2 Disc Blu-Ray/DVD set. An 8 Disc boxed set containing 2 Blu-Rays, 2 DVDs and 4 CDs will follow on December 2nd.

The 8 Disc boxed set includes the full King Crimson film, an early edited version of the film, a live concert from the 50th anniversary tour and a unique camera-only performance, plus a plethora of additional footage. 8 discs packaged in 4 miniature gatefold sleeves, with a 48-page booklet housed in a rigid outer case. Booklet includes notes from film director Toby Amies, David Singleton and Robert Fripp. Also includes the music from the original soundtrack and more, over 4 CDs, many tracks previously unreleased and/or new to CD.

The 2 Disc Blu-Ray/DVD set includes the full documentary film, an early edited version of the film, the final performance of the classic “Starless” from the band’s final ever concert in Tokyo, Japan in December 2021 and four trailers/shorts.

Toby Amies’ film about one of rock music’s most enduring, but simultaneously elusive, bands, “In The Court of the Crimson King – King Crimson at 50” provides a unique insight into the working process of a complex touring band, interspersed with contributions from previous band members to provide a contextual backdrop to the band’s past, as the most recent (2014-2021) line-up tours the world just before and during its 50th anniversary.

As King Crimson producer and band manager, David Singleton observed of the film: “All of life is here, not just music, and certainly not just rock. It has rightly been described as going beyond King Crimson into a ‘universal, inspirational study of what it is to work or dream to work as an artist.’”

While director Toby Amies writes of the experience: “In the Court of the Crimson King is not a film that wants to tell the audience what to think, rather it presents several different points of view about the creative process and what it means to be in this most unusual band; leaving the audience with a sense of both how complicated it all is, but also just how incredibly rewarding the King Crimson experience is both for the musicians and its fans.”

Robert Fripp announced that King Crimson had “moved from sound to silence” on social media after their final date in Japan in December 2021, making this release all the more poignant as a unique record of the band’s longest lasting line-up with tantalizing glimpses of the band’s history.

Here’s what the press has said about “In The Court Of The Crimson King – King Crimson At 50”:

“The film is angular and abrasive, exacting and playful, extremely funny and achingly melancholy.” - THE OBSERVER

“This unflinching portrait of the prog rock band is like an episode of The Office but with huge drum kits, grizzled roadies and rapturous fans” - THE GUARDIAN

“By turns comical and melancholy, it may be the most revealing film about working life in a band since Spinal Tap.” - THE DAILY TELEGRAPH

“A fascinating look at both a venerable institution, the dynamics of working as a multi-limbed unit that’s ruled by a single iron fist, and what it takes to play this type of music.” - ROLLING STONE

“Doc about a Prog-Rock Perfectionist Is Nearly Perfect Itself. About as good as Rock documentaries get.” – VARIETY

“A compelling insight into the tetchy men of prog rock. Their dedication to music is a joy, the persistence of Toby Amies ranks alongside Nick Broomfield. Even if you go in knowing next to nothing about King Crimson, you will leave feeling like lifelong enthusiasts.” - BBC RADIO SCOTLAND / RADIO TIMES, Siobhan Synnot

“The film ponders mortality, why music matters, and the sacrifices that bringing difficult art to the stage entails.” - THE TIMES

“In The Court of the Crimson King : King Crimson at 50 goes straight into the pantheon of those documentaries which enable us to appreciate the painful truth of what being in bands is actually like...there is no higher echelon.” - MOJO 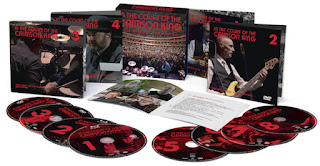