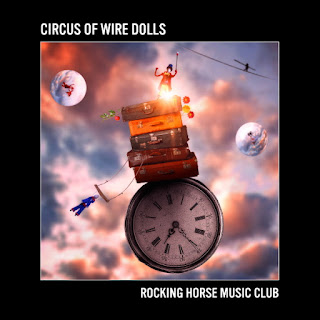 Plane Groovy and Rocking Horse Music are proud to announce the 2022 release of Rocking Horse Music Club’s genre-defying new concept album/rock opera, “Circus of Wire Dolls.” The album will be released on double CD on 16th September, with double vinyl to follow on 21st October.

“On the surface, the record tells the story of a man who creates a miniature circus out of wire, string, and cloth,” explains producer/songwriter Brian Coombes, “but it’s really about a man looking back at his life, his work, the people who entered and exited his world, his successes, his failures, his regrets.”

The album’s sound is warm and lush, with orchestral instrumentation and backing vocal arrangements augmenting the band’s sound. Vintage keyboards, including mellotron, optigan, celeste, and the famous Mrs Mills and Challen pianos from Abbey Road, also contribute to the album’s sonic identity.

The album was recorded at Rocking Horse Studio in New Hampshire USA, with additional recording at Abbey Road in London.