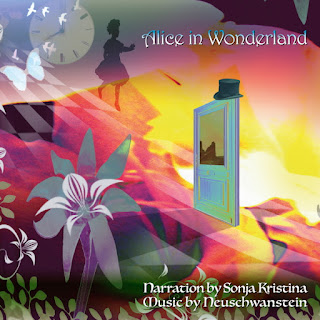 The original version of Neuschwanstein’s “Alice in Wonderland” had narration in German but, for the first time, this has been replaced with English language parts read by Sonja Kristina of Curved Air.

Musically this 1976 album belongs among the great prog albums and sits between Rick Wakeman’s and Jeff Wayne’s iconic narrated rock albums. This edition has been re-mastered with a booklet that includes two separate sets of liner notes (with rare images) on the history of the band and Sonja Kristina’s 2022 vocal sessions.

Sonja Kristina said of the release “I was delighted to narrate this wonderful psychedelic musical version of Alice’s dream in a dramatic instrumental landscape.  I loved Alice in Wonderland as a child and I’ve really enjoyed returning to the magic of this story. This album deserves to be thought of as a classic progressive rock album of the 1970s, so I’m pleased to have recorded the narration for it.”

This was the only mid-1970s album in the ‘Narrated Rock’ genre to be unavailable in English…until now.

Orders placed directly with Cherry Red (while stocks last) will come with a postcard signed by Sonja Kristina: https://www.cherryred.co.uk/product/neuschwanstein-alice-in-wonderland-ft-sonja-kristina/