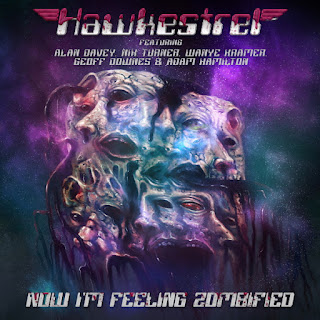 Los Angeles, CA – Former Hawkwind bassist and current producer, songwriter and leader of Hawkestrel Alan Davey has carved out a unique niche for himself, collaborating with some of the biggest players and musicians on killer studio recordings of both brand new originals and extremely inventive cover versions. In 2019, he teamed with future Hall of Famer Todd Rundgren on Hawekestrel’s superb version of Post Malone’s “Circles” and he recruited Cream’s Ginger Baker and numerous Hawkwind alumni to play on original tracks from the 2020 Hawkestrel album Pioneers of Space.

Now he’s brought together another stellar cast to reinvent a little known but instantly iconic track from the unforgettable British goth band Alien Sex Fiend. “Now I’m Feeling Zombified” is a track that seems primed for revival, as catchy as anything on your standard Halloween playlist but not overplayed to bloody death. In Davey’s hands, the track becomes even more powerful than ASF’s original, coaxing some stellar keyboards from Yes/Asia member Geoff Downes and exorcising a demonically brilliant guitar performance from MC5’s Wayne Kramer. Hawkwind co-founder Nik Turner and Adam Hamilton of L.A. Guns rounds out this murderer’s row of killer guests. Do yourself a favor and throw this on at your next Halloween party and watch your friends freak out! 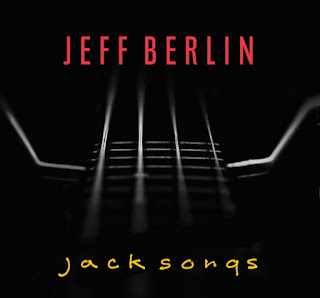 Bass icon Jeff Berlin will be releasing a new tribute album to legendary Jack Bruce titled “Jack Songs” on August 2, 2022! Jack Bruce, best known for his work with classic rock group Cream as well as his critically acclaimed solo work passed away in 2014. Jeff Berlin, who has been called “the greatest bass player in the world”, was a personal friend of Jack’s and wanted to record his songs in remembrance of how Jack helped Jeff to find his own musical path.

Says Jeff, “Recording the music of Jack Bruce has been the most emotional recording project of my career. Jack was the greatest bass influence I ever had. In the center of his music were these strange and wonderful bass lines weaving in and out of the key, reaching for resolutions and finding them, again, and again. Jack’s playing was a living evolving improvisation.

Jack was the Alpha and Omega for me. I never would have become the bass player I became if I didn't hear his unfettered improvisations and innovations, his creating a completely original bass tone, and his playing every gig as if it was his last. When he died, I immediately set out to honor him by reviewing his music to choose some of my favorite songs of his and recording them via my own musical vision. As was his legacy of musical brilliance, I wanted this record to be brilliant to honor his spirit. He really means this much to me.

‘Jack Songs’ isn’t a cover CD, not in the literal sense. Except for a couple of tunes from his Cream period (arranged in ways that should surprise people) most of the songs on this CD come from other periods in Jack’s musical life after Cream. Jack’s solo career represented a multitude of musical styles. This recording will be a new revamp of some of those songs, some of the best music that I heard from one of the greatest musicians of the last fifty years.

In arranging the music, I was inspired by Giles Martin’s production of The Beatles ‘Love’ CD. His production work on this CD is fantastic. I tried to follow his example of his fitting various Beatle song quotes from different tunes into each tune by doing a similar thing by combining different Jack songs. Rather than computerized manipulation of music that was already recorded, I arranged the music so that each song on ‘Jack Songs’ would end up as an individual work comprised of various parts of other songs in them. I never would have thought of this without Giles showing me this path.”

JACK BRUCE, BASSIST FOR THE ICONIC BAND CREAM, ONCE DESCRIBED JEFF BERLIN AS THE “THE BEST BASS PLAYER I’VE EVER HEARD.” 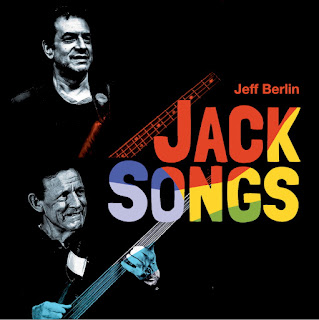 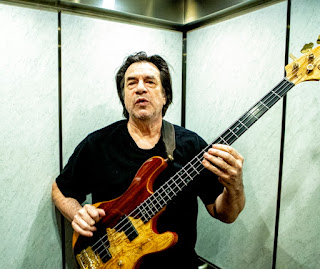 For over 40 years, Jeff Berlin has stood as one of the most innovative electric bassists of the 20th and 21st centuries. Known for his one-of-a-kind tone, jaw dropping technique and highly advanced harmonic approaches to the bass, Jeff has been one of the major figures in firmly establishing the electric bass as a solo instrument well deserving of its own distinct place in modern music. 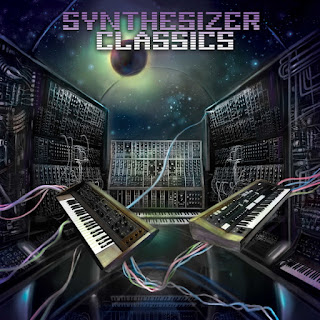 Los Angeles, CA – Some of the most heralded and widely-respected keyboardists on the planet have gathered together on a unique collection to offer their fresh new takes on some of the tracks that laid the foundation of electronic music and influenced thousands of synth-sational artists and players! Ever wonder what Mike Oldfield’s groundbreaking “Tubular Bells” might sound like in the hands of Dream Theater keyboardist Derek Sherinian? Or think that Moody Blues/Yes keyboardist Patrick Moraz would do a fantastic version of Jean-Michel Jarre’s superb “Oxygene?” Well, wonder no more as Synthesizer Classics has come to answer all of your synth-related prayers!

The new collection features all exclusive and brand new recordings by such world-renowned pros as Rick Wakeman, Asia's Geoff Downes, Focus’s Thijs Van Leer, and Larry Fast, who along with several others, have reached back into the past and recreated classics by Kraftwerk, John Carpenter, and lots more! Check out the first single to be released from the collection, Jordan Rudess’s tantalizing take on Giorgio Moroder’s award-winning score for the 1978 prison drama Midnight Express!

Synthesizer Classics will be available everywhere starting August 12. Pick up your copy on CD or vinyl or stream the album on all the major digital music platforms! 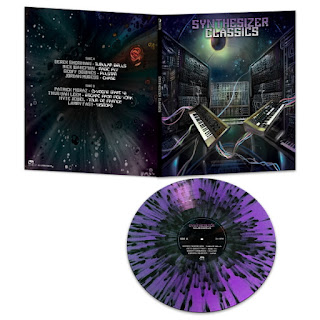 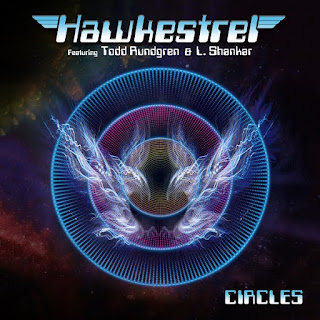 Los Angeles, CA - Hot on the heels of their debut release, The Future Is Us, the Hawkwind-themed supergroup returns with a brand new single, “Circles” featuring the extraordinary guitar work of legend Todd Rundgren and gorgeous violin soloing by musical genius Lakshminarayana Shankar (L. Shankar) who has worked with Frank Zappa, U2, Peter Gabriel, Jeff Beck, Pete Townsend and many, many others! The song, which will be featured on the forthcoming Hawkestrel album (coming in 2020), is an historic first for Prog Rock as it is the first Prog Rock-style cover version of a song originally performed by a hip hop artist!

Check out the new single and its accompanying video (directed by Jared Cohn):

To purchase the full-length Hawkestrel album, The Future Is Us, on CD, go here: https://cleorecs.com/store/shop/hawkestrel-the-future-is-us-cd/ 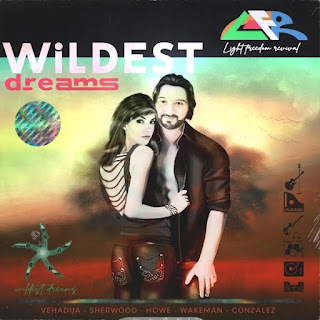 Vancouver, Canada - Light Freedom Revival continues its musical journey by envisioning the unique single “Wildest Dreams”, a cover of the song with the same name by Taylor Swift.

“I wanted an arrangement that would merge the Yes Universe with the Taylor Swift Universe, in the spirit of how Yes arranged America, but with the fun style of Taylor.” John explained, “I imagined this little LFR project like a chemical experiment and for this reason you will find as bonus tracks my versions of America and You Belong With Me combining to form a new melodic substance.”

The result is a seven minutes of fun prog experimentation which Vehadija hopes the audiences will enjoy.

The main single also debuts the guitar talents of the Argentinian guitar player Lino Gonzalez, from Cieloaberto who developed a style at times reminiscent of Steve Howe.

The single is released on CD and can be found at lightfreedomrevival.com as well as digitally on iTunes and Amazon.

Light Freedom Revival promises in the future a 4CD Jon Anderson Tribute Box set as well as a new album of original material. 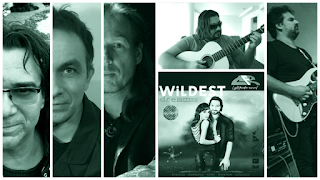 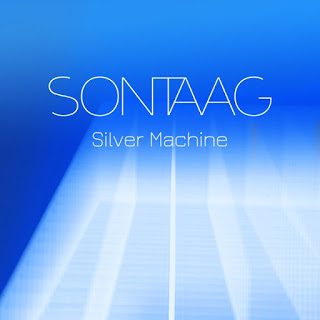 “Silver Machine” is mixed by Youth.

Design and photo montage by Julie Cunnah. Thanks to Kevin Nixon.

“Silver Machine” is available through Cleopatra Records via all digital platforms and also comes in radically remixed form courtesy of Sontaag's fellow travellers in outer and inner psychedelic space, The Orb.

Ian Fortnam: “Hawkwind were punk-proof. Even in '77, Richard and I would jam on 'Silver Machine.' Hawkwind were the UK's counter-cultural underground incarnate. I discovered them in that narrow space between Bolan and Bowie, simultaneous to Alice, in the summer of '72. Astral explorers. Eyes aflame with psychedelic visions. The people your parents dreaded you becoming. The coolest band alive. 'Silver Machine' was Hawkwind's magnum opus, a spiralling maelstrom of riff-driven brilliance. Who wouldn't want to cover it? Four years ago I found myself spirited to Nik Turner's place in Wales, where we spoke of the Great Pyramid, orgone accumulators, space rituals, hallucinogenics, sonic generators, woodwind and Hawkwind. Before we parted, I gave him a copy of the first Sontaag album and the seeds of the 'Silver Machine' project were sown. Obviously, the very best material deserves the very best band, so calls were made to maestro Youth and Dave Barbarossa (the dream rhythm section) and here we are. And what a rare privilege to work with The Orb whose 'Imaginarium Translucent JellyFish Dub' remix is a work of art in and of itself.”

Richard Sontaag: Ian's been pestering me to do a Hawkwind cover since way back when -- the coolest kid in our school, he was often seen walking around with the Doremi Faso Latido LP under his arm between classes. But our Silver Machine came about in an unexpected way. I was alone in the studio late one night, and noticed that the guys had strung up a microphone from the ceiling. I put all the amps in a circle around it -- which is really bad technique - and went round each one, blasting out Silver Machine on different instruments. That was the most fun I have ever had in a studio -- and some of it even made it on to the final track. 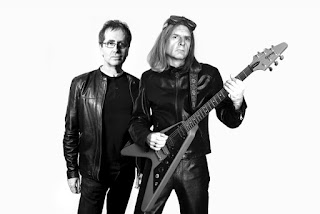 Here's what the press have raved about Sontaag:

“Progressive restored to its original sense. By referencing the last five decades of music and film, Sontaag create a highly original sci-fi morality tale for the future, and one of the year’s most unusual listening experiences, itself crying out for movie status.” 8/10 - Classic Rock

“Just download it to your brain from the nearest orbiting space station.” - Huey Morgan, BBC Radio 2

“A spectacular collision of British eccentricity and dramatic storytelling.” - Line Of Best Fit

“Sontaag have created one of the year’s most unusual listening experiences with this 21st century take on a sci-fi morality tale.” - Shindig